Currently in development, GenboreeStack combines our Rails/Redmine-based application plugins plus attendant REST API-enabled lower-level services in a SaaS layer together with an IaaS layer to permit instances of the SasS applications to instantiate in a multi-cloud scenario. 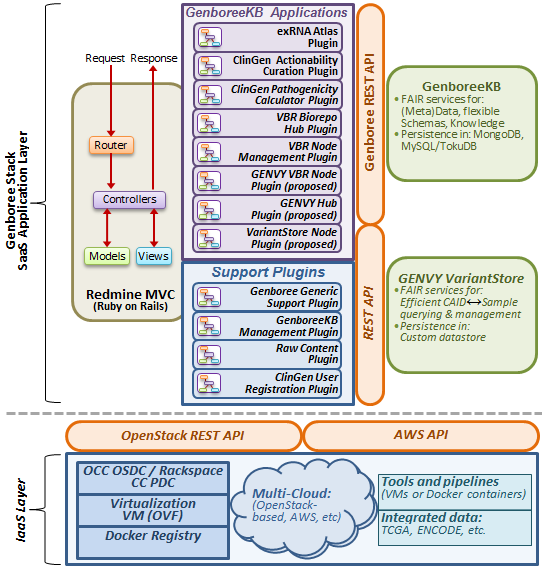 Thus far, our efforts have focused on the applications, which are generally implemented as plugins for the open source Rails-based Redmine team collaboration software.

We have already released several application plugins using this architecture, including:

Several others are under development or conversion to this architecture, including:

We have proposed to develop Genomically Indexed Virtual Biorepository (GENVY) software, whose user interfaces would be implemented in a similar manner and interact via APIs with structured data within GenboreeKB or with the purpose-built GENVY VariantStore for scalable storage & lookup of sample ↔ allele associations (the latter leveraging the CAIDs of our scalable Allele Registry).

As part of that proposal, we aim to incorporate IaaS-level APIs in order to seamlessly support elastic provisioning for not only web server and lower-level service workers, but also for data processing pipelines and user-invoked analysis tools. Currently: